Having a token climate policy, has been a major recurring political strategy of ALP and LNP, in order to stop leakage of votes to the Australian Greens. Each election the token policies have gotten weaker. Each election the price is lower to sell Australian resources to the extremely rich fossil fuel miners clique of the world, and the party members fail to honour their parliamentary oaths. Both major parties support big plans to expand coal and gas exports, with public subsidies, that overwhelm the token fundings of local mitigation. The bumpkins of the National Party are happy to sell out their farming voters to future droughts and economic collapse.

Carbon credits are a recurring hot scam, in the sense that the climate impact cost of each additional tonne of CO2 into atmosphere applies all the time during the next slow hot millennia, essentially uncountable for human survival, while the "offset" indulgence payment gets to be made once with money. The offsets are designed to be a token payment for emissions made in Australia to offset the processing emissions of rising LNG exports that are enabled by the ALP.

Like the indulgences once paid to the church for the forgiveness of sins, for public show, carbon indulgences help sooth the public accountability of the extremely rich.

Add to this the high average Australia lifestyle CO₂ footprint of 15 tonnes per person.

Australian food production is very likely to collapse by future decades of global warming we are promoting now. This is a national disembowelment by our own exported carbon emissions. We are now the sacrifice zone. By the time the global economy does collapse, the carrying capacity of Australia for a thriving civilisation will be negligible, as continental interior, mid-latitudes of this planet become unlivable, dry and scorched. A large net migration out of Australia will result, if there is anywhere still left to go who might take us.

It’s long past time Australia joined other countries and committed to no new coal mines or oil and gas wells, and the gradual phase down of exports in line with an equitable approach to meeting the Paris Climate Agreement targets. If Australia doesn’t, they will be forcing the world deeper into an undesirable trilemma choosing between climate chaos, stranded assets and unjust climate action or likely some combination of the three.

The climate token policy approach of the ALP is to separate entirely the areas of coal, oil and gas mining and exports, and local climate emissions mitigation, and have each pretend that the other does not exist. It takes high level double-think political imagination to perform this feat, more easily done after suitable inducements.

I have no doubt there are more people in the ALP, than the LNP, who are human and smart enough to want to do real action on climate change. It is about time they stood up for themselves. Climate Change Denial and Political Acquiescence are the playthings of the extremely rich, who are generally twisted, sociopathic, mentally sick beings, who own the fossil fuel cliques, and buy political party members, using the traditional tobacco harm playbook, which unfortunately for future human beings, does accumulate great harms. The inducements and funding work just as well on the ALP as on the LNP. Australia, you are owned. 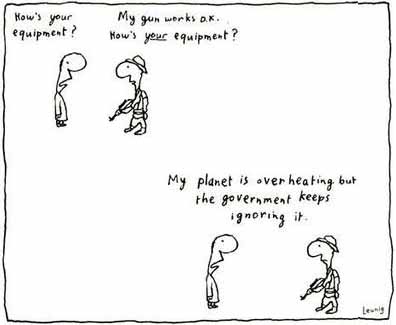 This great climate let-down of Australians has been going on past 2 decades now. Here is an online reference to the "Greenhouse Mafia" and a 4 - Corners program in 2006. https://www.safecom.org.au/csiro-silence.htm

The next paragraph is direct cut and paste from 2006 in the above link.

In 2006
Several deeply disturbing conclusions arise from the ABC Four Corners Report of February 13, 2006. First, the overwhelming evidence that the CSIRO, the body assigned to "independently" research and inform government also on climate change and its impact for government directions, policies and strategy, was gagged in speaking out independently.

---Having found out what I've now found out, I find it impossible to continue with a clear conscience without speaking out.

Secondly, the big industry players from the fossil fuel industries, were enmeshed with bureaucrats and according to Four Corners, they were given access to confidential information, and they even helped writing policies. Thirdly, the ABC program revealed how they were gagged in speaking out about the implications for Climate Refugees in the Pacific region, and about Australia's obligations to respond to the issue.