Anthropogenic Climate Change, ought to be relabelled as "Economic Climate Change", since collapsing our global economy is the only possible way that remains to maintain a human habitable planet. In any case, the global economy will collapse regardless in another decade or two, after production limits for fossils take hold, but only after we have made future climate change that much worse again.

Lest anyone think that current Global Warming is not produced by our excess of greenhouse gases, or is not currently being produced by human economic industrial metabolism, or is good for our future, below is a link to a book about their known and proven long term results, from past earth history, which are known as global mass extinctions.

Preview "Ends of the world" by Chris Brannen.

The carbon cycle has played a big role in all of the big mass extinctions, which often marked the transition from one geological age to the next, because of the marked change in fossil and mineral records.

We haven't reached extreme mass extinction conditions yet, because that would imply the global climate situation was irretrievable. What is perfectly sure, is the extreme rapidity at which we moving towards that direction. We putting carbon dioxide more than ten times faster into atmosphere and oceans, than occurred in massive geological climate extinction events of the past

The only saving grace we are sure to encounter, is that Global Economy is unable to maintain this fossil fueled growth phase for much longer. Our global fossil fuel based economy is liable to collapse, for this "Economy" depends entirely upon cheap fossil energy, plus all the natural systems we exploit unsustainably, by employing cheap fossil energy

The production costs of fossil energy are rising fast, the cheapest energy has already gone, and now we all feel the rising costs of living, as "Limits to Growth" economic breaking forces. Growth in atmosphere CO2 needs to stop as soon as possible.  Levels have reached 410 ppm, increasing by around 2.5 ppm each year.

Coral reefs become extinct at 450-500 ppm, due to associated pH of ocean making calcification by coral organisms impossible. Much of the ocean food webs will collapse after this. Undoing the current level of ocean acidification from fossil fuel CO2 will take around 100,000 years.

This is our impossible to solve predicament. To escape even worse global warming, there needs to be a collapse in global economy energy production, 85% of which is from fossil fuels - oil, coal and gas.

Four hundred years ago, we already had a history of over 50 centuries of various kinds of agriculture-based civilization, which had not used vast quantities of fossil fuel to have an "Economy" and "Trade".

Even at four hundred years ago , three quarters of global human population were not tied to being part of some citified state administration, and had real and dynamic relationships to ways of life that depended directly on nature. The general opinion is that traditional lifestyles are better off in many ways. Once disturbed by modern state interventions, social and environment damage ruins pre-fossil fuel ways of life. Now through climate change, fossil-fuel civilization threatens traditional ways of life without direct intervention.

"Human Anthropogenic Climate Change" might as well be re-labelled as "Economic Climate Change". This is the message I took from the article named "The world's weird self-organizing economy".

I attribute failure of governments to act fully on climate change mitigation from the fact that global warming is a feature of our global economy. The failure to put a reasonable price on fossil fuels at their production source, reflects the fear of rich and powerful that such a thing done honestly would actually work, and reduce their wealth and power. After all, the rich and powerful don't care how anyone else would be effected by a carbon price.

Gail Tverberg, about once a month publishes a new article at "Our Finite World". Usually Gail hasn't anything much new to say, she has said similar things many times over. It is usually a fresh reiteration of the same uncomfortable messages. Each new articles value for me, usually lies in the depressing reminders of the uncomfortable messages, and the new graphs that are presented from more up-to-date statistical information published by global agencies.

Here are some pertinent graphs downloaded from "Our Finite World", to show just how much of our Global Warming is "Economic". 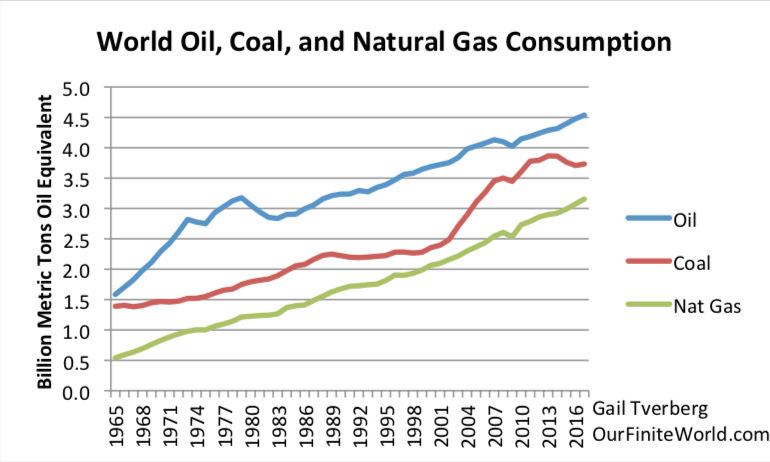 What's interesting/depressing about this graph?

First of all, it shows the world's still growing hunger for energy. Note that the units are converted to oil weight equivalent. Oil is the most important and the the most energy dense, of the three fossil fuel energy sources. It can also be considered more "primary" than the other two. Oil, in the form of diesel fuel, powers most of the machines of mining, extraction and transport, that enables supply the large quantities of the other two.

Economic conditions affect all three, but economic conditions, related to huge oil price spikes around 2007-2008, were part of a "Global Financial Crisis" in 2008, producing a simultaneous "blip" decline in all three at that time. It seems likely that a decline in Oil production, will lead to serious declines in coal and gas production.

Conversion factors to metric tons of oil equivalent are necessarily approximate - from https://www.extension.iastate.edu/agdm/wholefarm/html/c6-89.html

The choice of "billions of metric tons of oil equivalent" , shows that it's the total energy available to our economic systems that matters. Oil consumption in 2017 at 4.5, is three times that of 1965 (1.5). Oil consumption doubled between around 1965 to 1971, then plateaued around 3.0, till 1986, and grew more steadily by 50% to 2017. I'm not sure what conversion factor was used for coal. There aren't any significant "hard coal" resources left.

The costs of "production" of oil have been been steadily increasing. Between 2000 to about 2011, they approximated 10% rise per year, for big oil majors. Since 2011, I have seen no published statistics on this. Gail has mentioned published "reserves / production" rations, that give approximations to how many years of supply left. -

We won't be able to keep up supply at current rates. The last reserves are subject to "decreasing marginal returns". As production costs rise, the ability to extract the remainder decreases. Without oil and gas, the remaining coal will be much slower to extract, so that 50 years (to 2070) is a definite upper limit on global "Business as Usual". Major economic collapse from energy systems shutdown will be closer to now.

All this is summed up in the rule that "Energy return on energy invested ratio" that has always been falling for Oil, Coal and Gas. An ever larger part of the rising consumption of fossil fuels, gets used up to make the remainder available for doing real economic work. As our global population still rises, global "net" energy available per capita is currently stationary or falling. 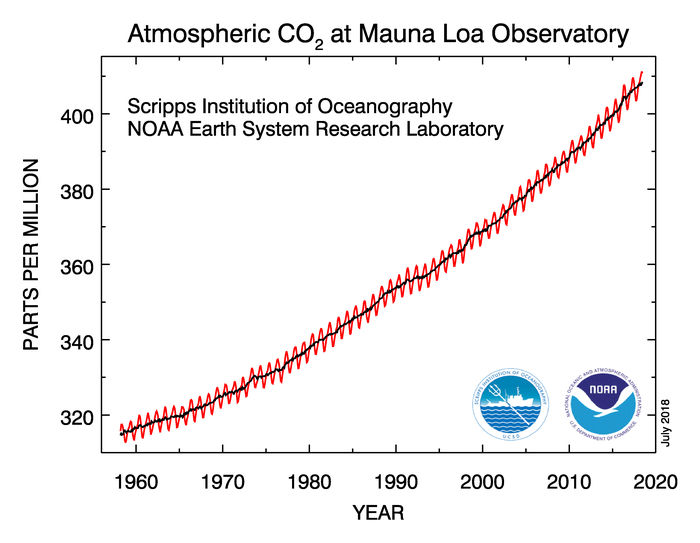 Global CO2 rising ever so slightly faster with time. The pre-industrial  level of CO2 was 280 parts per million.

NOAA has a handy online graph creation menu tool - plot anything you'd like. So I generated this one - 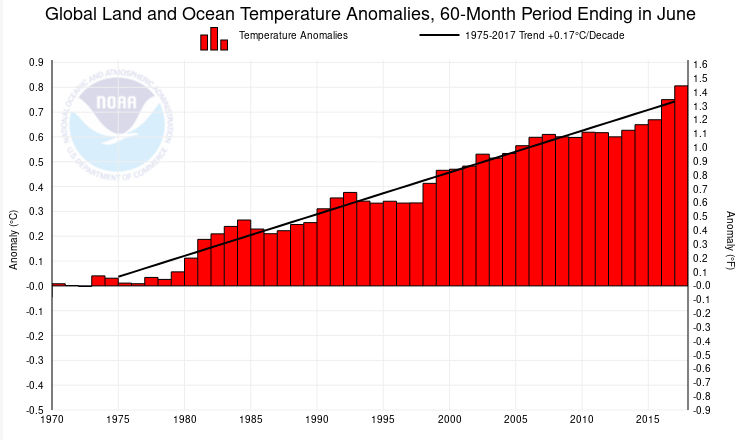 The average temperatures on land are rising faster than over oceans, by an extra 0.1 degree C per decade.

The trend rise in land temperature is 0.28 degrees C per decade. We are already 1 degree above pre-industrial normal.

We will most definitely reach 2 degrees of global land warming by 2050. There is a time lag of warming, as current earth system radiation imbalance settings take a few decades for additional heat energy to accumulate in oceans and atmosphere. Even after production of oil coal and gas declines, global warming will continue for many decades until the radiation imbalance is resolved by additional atmosphere warming. There are longer-term earth system feedback changes that will make this worse, including warming induced release of large amounts of permafrost soil carbon. Our economic systems will lose dearly. First for the ongoing rapid and permanent depletion of fossil fuel sources, second for ongoing and permanent climate disruption to water, food, and climate habitability. 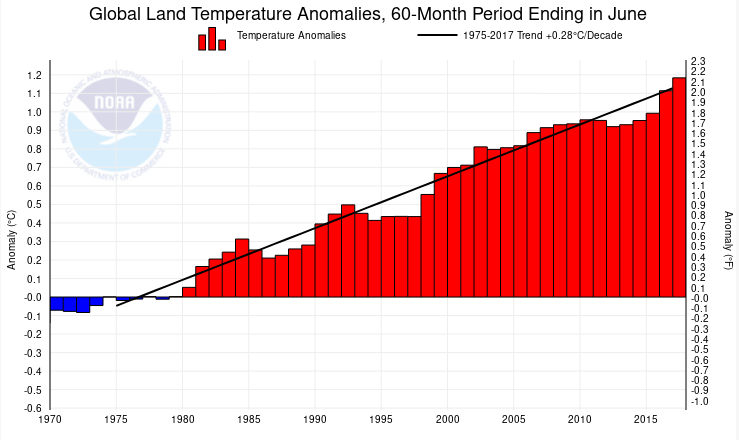 As Gail Tverberg continues to say, slowing economic growth, like a bicycle coming to a stop, leads to multiple economic systems collapse.

Compare to the consequences of accelerated climate disruption, economic collapse is still the more survivable option.

Too bad, there isn't time left for a large scale transition left away from fossil fuels to any other kind of energy. Fossil fuels still make up 85% of global energy.

Wind and Solar, for all their impressive growth, over a few decades, compete with 2 centuries of industrial exponential growth of fossil fuel consumption, and its history of fueling fires of imperialism, colonialism, wars, and current empires, and firm lodgement in the politics of power control of global governance. 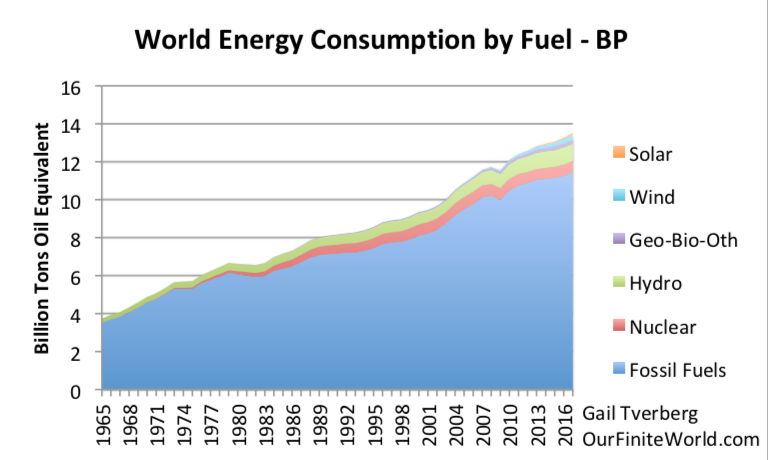