Australians from school age up, organised and achieved huge crowd turnouts for rallies and marches in centres across Australia, on Friday 20th September. Officially it was called a school-strike for climate, in honor of school student Greta Thumberg, who began to do this herself, on a Friday. Everyone was encouraged to make this one big.

Three demands of the movements asking for climate action, could not be any clearer, louder, or have greater recognition of our current global heating insanity. Rapid transition from fossil fuels to renewable energy. No new coal, oil or gas projects. Transition plans for current workers in coal, oil and gas industries. (COG)

Australian governments cannot easily deny this turnout never happened. In Sydney a recent rare prolonged rain dump stopped the day before as predicted for a sunshine break today. Mobile cameras took pictures and videos, for their personal record of events. The large numbers are evidence that Climate organisations and networks can muster increased enthusiasm for political action. The ABC published a timely article with video online. I brought my own large sign and took some audiovisual evidence, which includes the above you-tube clip. A common theme in hand-made signs was a burning earth. As the sign in the video suggests, parents and children attended as families. At least one bub was getting a breast-feed in the middle of the crowds.

Servile Murdoch media had previously published negative articles with insinuations that the school kids ought to have stayed at school,  which echoes the political coal-toadies in government, as if the government is actually already doing its job. These were given the traditional contempt that they deserved, by turnout. Media published a totalled figure of over 300,000 people participating across Australia.  The Melbourne event, no surprise was also very large, as documented by the ACF website. The march to Hyde Park from the Domain, took over an hour for all the participants at the end of the rally.

I didn't register anything that was really new in speeches to the crowds at the Domain. They must be getting to know all their lines by now, with referrals were made to the standard government lies. The crowds at Sydney were requested to SMS "STRIKE" to the mobile phone number. This is now a standard for such large numbers to sign up in mass participation and automated recruitment process for collecting new contact details for upcoming campaign escalations. This process, plus the requested identify responses, must have overloaded the capacity of the mobile networks, as my first send failed after a long time-out. 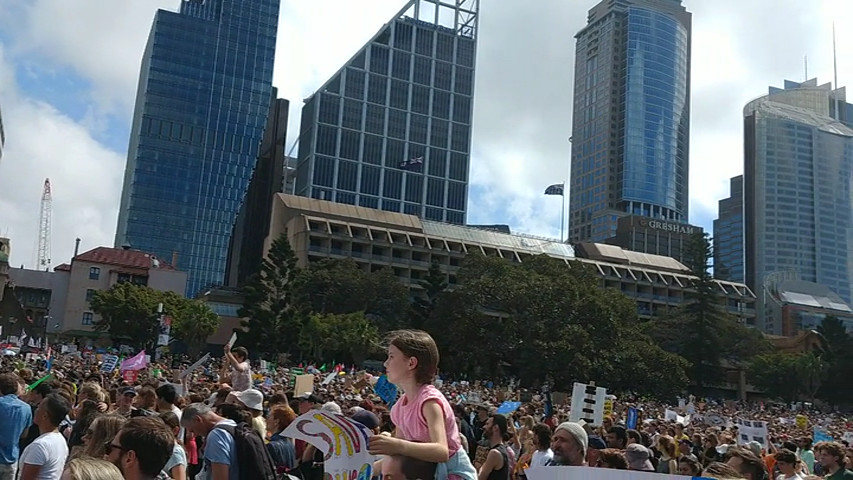 Much of this, apart from the scale, are growing ritualised things that have all happened before. Unfortunately I am still expecting the ritualised bullshit, denial and standard inaction rhetoric to follow from our coal and gas toady politicians, maybe at a bigger, more repressive and greedier scale. More and bigger events will happen around the rest of the world.

Failure of national and global governments to actively meet these reasonable and peaceful demands will greatly diminish their public legitimacy, and the numbers of people willing to throw governments on the foreign fossil fuel pay-roles forcefully out of office will have to further increase. Too bad these climate denialists are holding out for the greatest and longest possible profits pay-back to their sponsors. To quote Australian energy minister, and coal fanatic Angus Taylor -

Australia should keep all its existing coal generators online and ensure they are “running at full tilt” to ensure reliability in the grid.

The renew economy article mentions some well-published details, that deeply contradict the propaganda myth-makings of Angus Taylor. Coal generators are a documented source of increasing unreliability in the national electricity grid. Renew Economy has spent a lot of time studying power generation, and regularly publishes grid statistics. Coal and gas power stations almost never "run at full tilt", since that would imply total demand is always at or close to exceeding the current total supply capacity of power generation, and simultaneously all generation units would have to be in full working order at close to full capacity.  This would be an unusual case, even in during critical "peak" periods, especially for the old, more expensive "coal clunkers". Thermal gas and coal power stations are inclined to become more inefficient and more likely to break down during periods of heat stress, since their designs are stuck with thermal engineering principles derived from heat physics. How can we be served well by ministers that display such ignorance about their portfolio subjects? The government disinformation strategies aim at increasing public ignorance and confusion by government political messaging.

Let us end in very good news, for the people of Bylong, most of whom will be celebrating recent news of the rejection of new coal mining works, for the foreign coal corporation (KEPCO) by a just released NSW Planning Assessment Commission report. The project was assessed as "not being in the public interest".  Bylong Valley is a beautiful place, which also a good indication of the quality of soils and agriculture productivity that were under threat. A big thank you for the work of Lock the Gate, for helping to organise awareness, support, submissions and actions against the project.