The invisible limits to global growth wall have been hit, according to a number of writers and sites online. Extra nervousness happens in every stock price slide. Maybe the fast trading computer algorithms are programmed to stop them going all the way down, by creating "recoveries".

The following Bloomberg fragment link appears to have been half serious in the "April 1st" joke spirit.

https://www.bloomberg.com/news/articles/2019-03-31/global-growth-turns-a-corner-but-risks-hitting-a-wall-chart . "Optimism should be tempered with caution".

However the USA corporate world is not feeling too much amused.

US consumers appear not to be taking on more debt, because they are already maxed up with debt repayments and interest. The limits to growth are not a hard wall, they are speed limit. Going through stuff too fast eventually takes the life out of everything.

Probably the only sector doing really well with guaranteed future fundings, with freely printed USA dollars, are the huge cost-inflated USA global military corporations, which by now must be running the scams of the millennia, and need to go and blow up another few nations to justify their vast investments.  Nuclear options are in danger of being taken off the table and actually used.

Despite the apparent recent low in oil imports, the USA is going into another period of feeling very resource insecure. Its periodic resorts to international cannibalism are not new, but appear now to be seriously hostile and barely disguised, now in earnest in the face of declining global resource supplies of coal and oil.

As a result many global cooperative endeavours are going backwards. The biggest nations are treating each other with growing hostility. "Interference" claims grow, both the false and real. The USA foreign aggression empire has besieged both Venezuela and Iran, presumably for ransom to access their large oil reserves. History shows these kinds of threats escalate badly into wars, regardless of "good" intentions. China is pushing back on foreign incursions into its claims on the South China Sea. The USA sets up tariff barriers against trade with China. Such global pretend cooperation on environment issues such as global warming, is already as good as dead.

It is likely that none of the trade, or the growing hostilities tactics, will actually work to relieve the underlying pressures that cause them.  They add to pressures to make them worse, so all of this is most likely to escalate into global wars of devastating destruction. War is the traditional human solution to unfix-able relationship problems.

Gail Tverberg on "Our Finite World", continues to present evidence and arguments that prices for key global energy commodities of coal and oil will be too low to support their ultimate producers, due to our economic systems. Gradual economic collapse feeds on the increased poverty of the masses, exacerbated by growing wealth inequality. Symptoms of gradual collapse are growing failure of people at the middle to bottom of society in all nations to afford the products of energy, which are necessary for adequate food and water delivery, let alone security of shelter and housing tenure.

Increasing right-wing and neoliberal governments aren't going to be helping the global losers out, as they move to raise barriers for "keeping them out", and therefore it won't be too long before social behaviours include "pushing them out".

This "Affordability" crisis is what should ultimately bring down consumption first, followed by production.

Therefore why does global GDP, energy consumption and emissions continue to rise? In percent terms it is getting slower, and that is what the global financial system worries about. In absolute terms, what global warming cares about, the new yearly additions are still at record highs.

Total consumption varies over broad regions, or "markets". Sales get pulled towards the demographics and regions where demand appears stronger. As long as the distribution of production and consumption is adequate in some regions of the world, the globalised production system can continue to grow. India and China have rapidly growing local markets. Although affordability may be growing tighter, and more people are dropping out, global population and the total numbers of buyers continue to grow.

Global consumption of energy rose by 2.3% in 2018, and this was said to be the fastest in a decade. How much of this was wasteful or used up in its own production as "input" energy, how much was used by global military industry and how much actual "net energy" managed to do useful work and feed people is not easily obtained from the published statistics.

Ms Tverberg reprints in this months essay, the "Limits to Growth" general position, in the graph below, which suggests that global pollution won't peak until after 2030.  Alas for global warming, but the final tally for CO2 emissions may get to be around twice what we have added already, sometime around 2030, to ensure that global civilisation cooks itself in its own cesspool of hot oceanic plastic soup. This will surely happen if civilisation keeps going on long enough, while being fossil fuel dependent until it is all gone.

Here is Gail Tverbergs placement on the Limits to Growth future map with her global "we are now here". 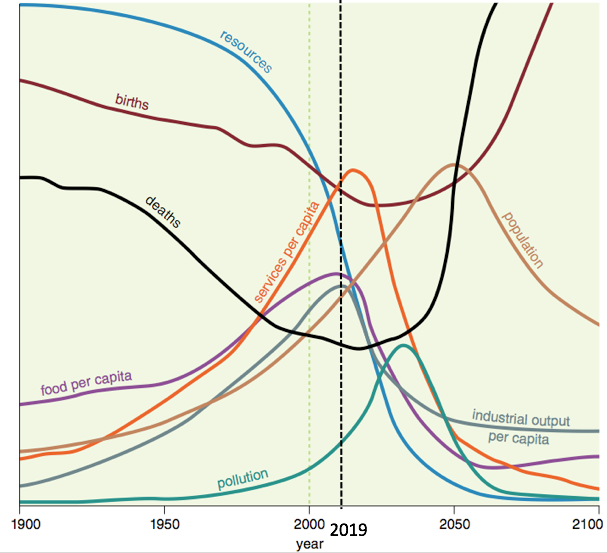 Overall, without the transition to low-carbon sources of energy in 2018, emissions growth would have been 50% higher.
-- https://www.iea.org/geco/

I am not sure about the "emissions growth would have been 50% higher".  That implies global supplies of coal, oil and gas could have actually supplied that demand, without charging higher prices for the more expensive resource sources. Cause and effect answers can also be the other way round, that competition from renewables enabled total energy growth to continue at current prices and pace.

Post Carbon Institute has a special "I told you so" web page, on "Limits to Growth". https://www.postcarbon.org/program/limits/

Despite aggressive attacks from some corners and the general ignorance/denial of policymakers and the public, we appear to be tracking the standard-run scenario of The Limits to Growth.
Post Carbon Institute believes that the energy, environmental, economic, and equity challenges (the E4 crises) we face are interrelated facets of one essential truth: the planet can no longer support our growing numbers, economic activity, and material/resource consumption. We are, in essence, hitting the Limits to Growth.
Post Carbon Institute helps people connect the dots between the E4 crises and proposes systems-wide changes to address the Limits to Growth.