Our hot days are numbered out west

Catastrophic bushfires in south-eastern Australia, like this summer's ongoing catastrophe, have always been caused by combinations of weather patterns and fuel load, often the unfortunate synchronicity of circumstances. They are now labelled as 'unprecedented'. The main relevant causal circumstance change in the last 50 years, from 1970 onwards, is global heating.

Current Australian Government climate policy still follows the worst case scenario.  For us in Western Sydney, and other parts of Australia, we can look forwards to a future of more unbearable heat impacts, of counting many more really hot days. Current climate policy is not acceptable.

Climate scientists have crunched all the relevant data, produced presentations of important historical trends, developed realistic computer models and made ominous predictions. Just about everywhere on this planet is getting warmer, in particular the huge volumes of water in our oceans.

Rainfall is becoming more intermittent and variable, from intense and heavy to none at all.  The number of expected extremely hot days in summer is increasing. Australia's average warming so far is around 1 degree C, like the global average.  Southern Australia is warming faster than Northern Australia. Southern Australia is getting drier.  The last 10 years have been drier, culminating in severe widespread drought over the last 3 years. Polar regions are warming the fastest.

Don't take my words for it, check out the "State of the Climate 2018" website and PDF download This is roduced by the Australian Bureau of Meteorology, which updates its presentation report every two years. Global climate is changing that fast.

Rather than admit these causes for alarm, some politicians stoop to making sly political slurs on the scientific integrity of the Bureau of Meteorology, which is typical denialist bullshit.

What does this mean to people living in Western Sydney?  The inland suburbs of Sydney still suffer the hottest summer days, as they are further away from ocean. The Australia Institute "Heat Watch" report has zoomed in on local climate predictions, and presented alarming numbers of what future warming will mean to Sydney's sweltering west. The further west in Sydney you live, the hotter it is going to get. Westies know this from experience already. We have a widening heat distance of Westies from Coogee, as well as political and wealth distance.  Distance means more hot days and higher maximum temperature.

So the first graph in the "Heat Watch" report shows a growing wide range of days over 35 degrees over this century. That range has some uncertainty of prediction with time, and averages over distances to the west.

How long will current global greenhouse emissions will continue?   Thirty five degrees outside is too hot for the human body to cool down by sweating.

To show the effect of distance to the west, forecast predictions for some of the existing weather station locations are shown in the report. In case you didn't know, current policies scenario is the "worst case" scenario. 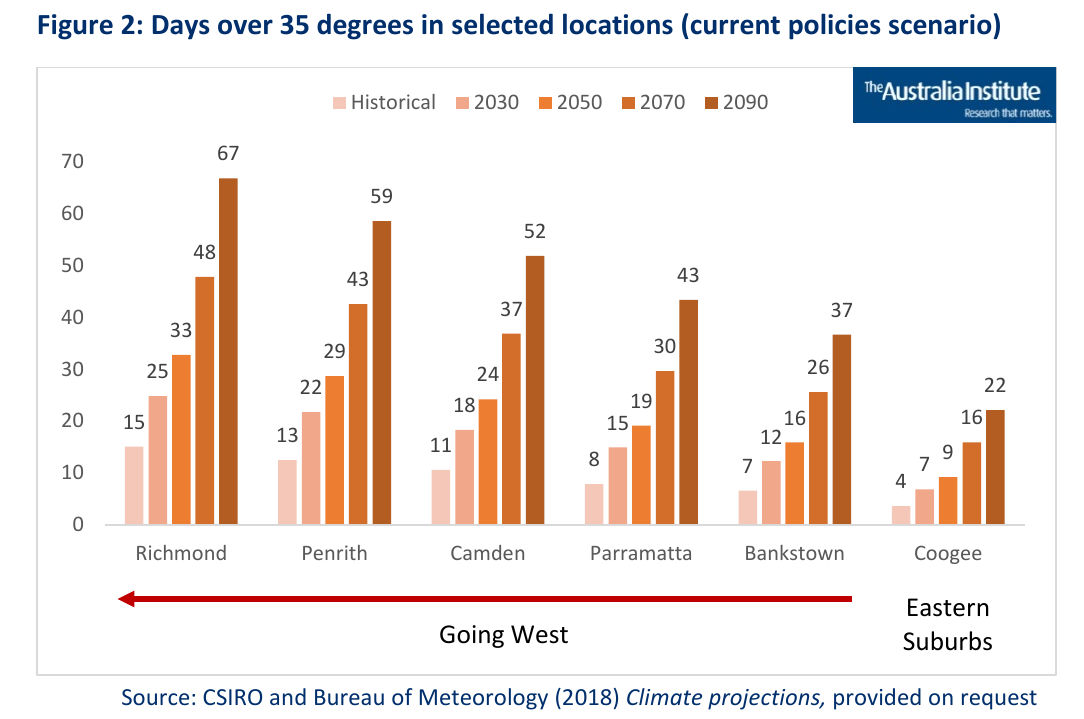 If going over 35 degrees more frequently is bad enough, the number of record breaking days over 40 degrees also increases. This is predicted from the normal distribution of temperatures around the average. As it shifts higher, more of the tail slides over into the extreme range. Over the past 50 years, the table below from the report shows that the distribution has already been shifting.

The Australia Heat Watch report also shows likely numbers of hot days over 40 degrees for the individual localities.  Parramatta and Penrith are shown below.  Richmond is worse.

The extended kind of catastrophic bushfire season that we experience now over this summer period of 2019-2020 has been long predicted by many climate experts and bush fire experienced people in Australia, and globally. Predictions of increase in severity and frequency, even with quantification, can be found in many expert and government publications going back decades. The state of the climate report mentioned the increased chances of combinations of events - summer heat wave, winds , after months of dryness, multiple extremes together can combine to make our predicaments worsen.

When pressed hard with backs to the wall, some spokespersons of conservative parties in Australia have admitted that they have "known" about the link between climate change and bushfires in Australia for a long time. Which means that on most other occasions, they have been talking political climate denial bullshit.  Merely being aware of the link doesn't count for anything that matters. Not taking sufficient action is still denial. Climate change is still siloed off in the government and fossil fuel world as something that other people, termed "alarmists", get to worry about.

Much more effective greenhouse emission policies can exist for Australia, as we are currently following worst case scenarios.   Westies need to pressure the Federal Government for it to get much better than this.

Manuel Garcia has done a few confronting articles on the lack of decent panic on global heating, with some interesting you-tube links for interviews and science background.
So have so many others. The actual knowledge of our complex of predicaments and ability to connect the dots is now very widespread. Only national governments in the fossil fuel dependency game are still hard at business as usual.

Climate Change at the Movies -