Bob Brown and his #StopAdani entourage, are moving up East Australian Coast towards the Galilee Basin, as a "Convoy", with scheduled stops organised on the way. Some electric passenger vehicles are joining the trek.

Parramatta Park was widely advertised as the major stop for Sydney on Easter Saturday, 20th April 2019,  for people to come and listen. According to this SBS news article, up to one thousand people attended during lunchtime. This author missed out, and even worse, had already booked more personal carbon emissions in air travel to and from Brisbane, to attend National Band Championship Easter events. 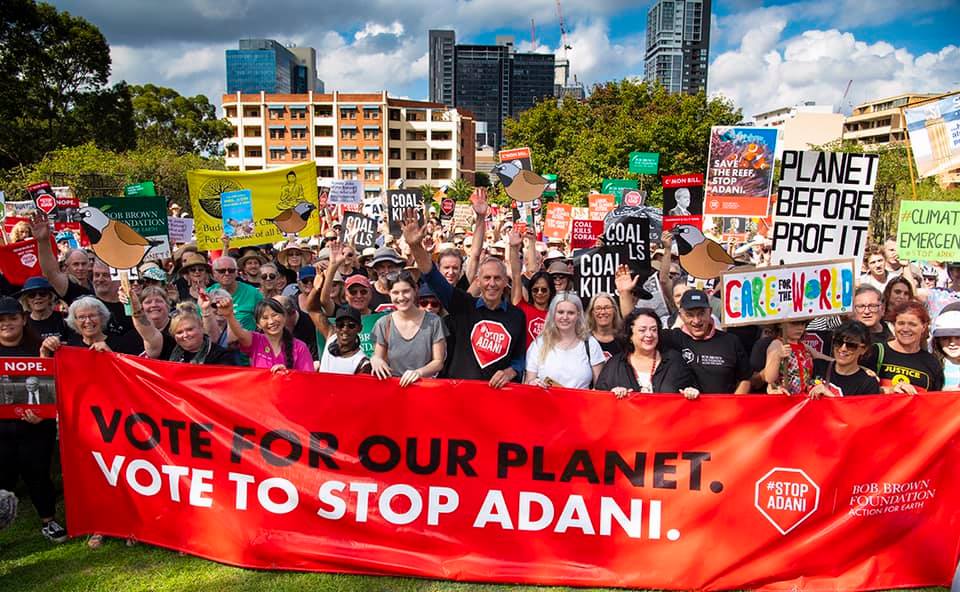 Other stops have been equally well attended, at  and the Brisbane stop may have been around 5000 people involved. Ongoing details are on the Bob Brown Foundation Facebook page - https://www.facebook.com/Bob.Brown.Foundation/ 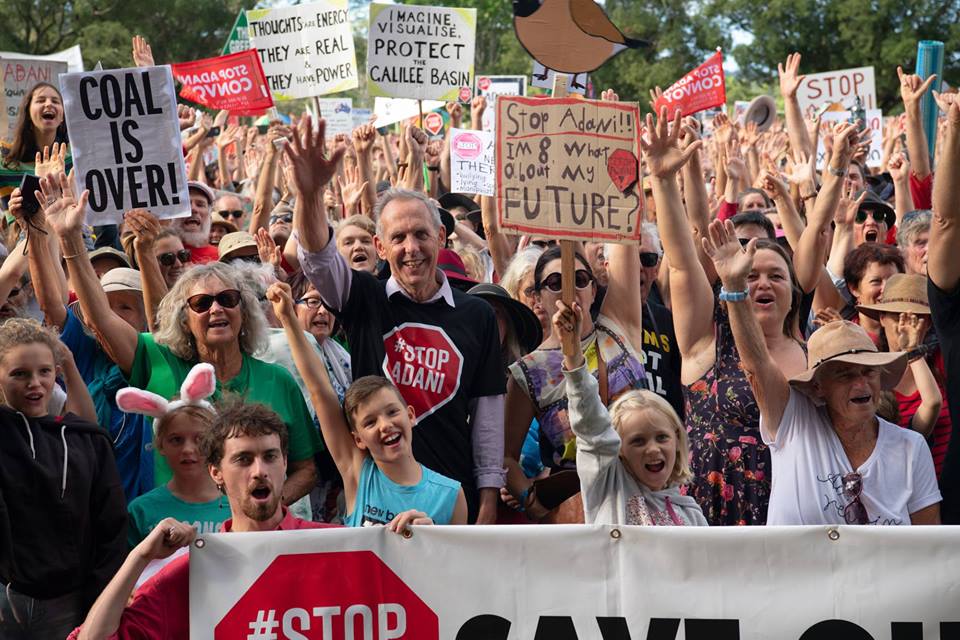 "The Australian" newspaper has become sufficiently alarmed about Bob Brown's Stop Adani convoy, to put out an article in its Business Section, that implies that Bob Brown and us environmentalists are lying and neglecting to tell the truth about the life-enhancing properties of the coal to be mined from the Galilee Basin that will improve so much the lives of so many poor people of India.  This is typical bullshit from Murdoch's Minions. Below is a quote.

"More than 90 per cent of India’s villages have no access to electricity. Their main sources of fuel for heating, cooking and light at night are firewood and cow dung pats. Both are bad for respiratory health and both are far worse for the environment than clean coal-fired baseload power. Adani’s coal will be cleaner than most alternative coal supplies India might be able to import."

The first two sentences are factual.  But there is no such thing as "clean coal" baseload power. Galilee Basin Coal would be typical dirty thermal coal, with more than typical ash content. The alternative sources are most likely more of the same. The cheapest source is taken, according to market supply.  The point of mining lots of coal is to force the global coal price cheaper for all the profit making activities that utilise that energy. Value-added business is where the bigger money is made. Australians should know this by now,  since it is arranged by their politicians that Australia imports the remains of its own native forests as paper and wood finished products from Japan, and Australia buys its own Australian natural gas off ships coming from the Gladstone LNG export terminals, or locally at the same international price. Great business for the re-sellers. Australian politicians are so clueless! Adani is a family owned, vertically integrated corporation and its energy customers would like to sell value-added products back to Australia, while profits go to personal tax-havens. Most of the jobs from Adani Coal will be where the energy is used to do the value-added work, in India.

Yes folks, the aims of so-called journalism in "The Australian" business pages is to find ways to help those duped Australian capitalists assuage their conscience, if they still have one, by believing stories with high bullshit content, as they go about their investment deals to help plunder and further pollute this planet.

Few ordinary Australians will be regular readers of the business section of "The Australian". This author only came across it on a google search. A basic online subscription may be required to read online what old discredited and recycled propaganda Murdoch's hacks are currently pushing regards coal and climate change.

Do regular readers of "The Australian" remember anything, or have any critical thoughts? China went down the heavy industrial coal-fired electricity path for its cities, and made city air unhealthy, unbreathable, mask-mandatory and life shortening for huge numbers of people. Half of Sydney's air pollution is from the same cause.

There are reasons that more than 90 per cent of India's villages have no access to grid electricity. The combined numbers of villagers are too poor to afford grid electricity, for the suppliers to recover the costs needed to justify the investment of all the long transmission lines that would be required to build.  And building coal-fired power stations closer by , to make the transmission lines shorter, would be just a more expensive pollution and climate-change disaster.

If villagers in India need to collect animal dung to burn to cook local grains for survival, they also don't earn too many rupees for exchange, and their lifestyles won't likely require too many electric powered conveniences. Their will be no local step-down transformer, and no local electricity retailer. Adoption of community,-owned, local renewable energy, standalone grids are a much cheaper way of provisioning rural community energy in India, without extra costs and health impacts. So the energy from Galilee Basin Coal will never be used directly by poor rural villagers in India.

Coal-fired power is used in large industrial areas and cities that will suffer the extra pollution. These pay for their coal energy with export incomes from mass production of consumer products.  Coal power is going back to the beginning of the industrial revolution all over again.
Exporting coal from Australia to India, is the Australian way of exporting the costs of its high-consumer lifestyles, to the lower costs of labor and poorer regulation of pollution in India.

There are ways to help poor villagers in rural India, reduce ill-health from dung fires and reduce their "black carbon" production. An awesome solution and business opportunity  has been found to be the provision of high efficiency and low pollution stoves that remove indoor pollution.

"The Global Alliance for Clean Cookstoves, a U.N. Foundation initiative working to develop a viable cookstove market, will have helped distribute 43 million cookstoves worldwide by the end of the year by linking manufacturers and developers with investors and other financial support mechanisms.The potential market is at least 10 times that size, likely more given that many homes use more than one stove."

"Clean Cooking" looks like a great carbon credits project for the Australian Government, and maybe the ALP will consider it, to prove its commitment to improving the lives of poor rural villagers in India.  The credits can be morally added to all the global carbon emissions saved by not mining the Galilee Basin for Coal. All those poor people in India, and even rich Australians, will benefit from coal being made more expensive, because reducing global carbon emissions is the best way currently known to reduce future life-threatening climate risks. As Will Steffen has been quoted as having to publish,  "carbon emissions cannot be reduced by actions which will increase future carbon emissions".

The bigger problem is that the Indian state, follows a vision of industrial-scale, mass-corporatist agriculture, which does not include a future for Indian villagers and their traditional subsistence livelihood. The results of this growing extreme industrial wealth inequality are also sponsored by coal power stations.