There has been news of a large backlog of ships full of Australian coal waiting in line to unload at Chinese ports. This has been mentioned in the news a while ago. It is now officially acknowledged, since Scott Morrison has spoken up with umbrage against it. What ever he said was not very interesting. The claim that other nations coal is "50% dirtier" than Australian coal could only come direct from the Minerals Council of Australia, who probably have told the Prime Minister to appear to "do something".

For an expert view on the actual market response to "coal quality" differences, it appears that "thermal coal is just coal".  Coal of any sort or origin gets shovelled into boilers to burn to make steam for electricity. Differences in coal energy content and pollution are small, compared to the gulf between any sort of coal and renewable energy sources. Both infrastructure and emissions costs now greatly favour renewable energy.

Sure, there are some boiler and blending constraints, but notwithstanding coal luddite claims that Australia’s coal is slightly less carbon polluting than someone else’s seaborne coal, the minute difference is irrelevant – all coal is almost 100% more carbon intensive than wind, solar, hydro, nuclear or energy efficiency. Or green ammonia, as Japan’s JERA is now thinking.
- IEEFA - Tim Buckley - https://ieefa.org/ieefa-chinas-ban-is-less-of-a-threat-to-australias-coal-industry-than-international-climate-ambition/

In actuality, coal power plants would become more economical if converted to solar and battery systems, since they already have grid connectivity. - https://ieefa.org/ieefa-repurposing-coal-plants-into-solar-and-battery-can-pay-up-to-5-times-more-than-decommissioning/

Along with other exported Australian products, such as barley and wine, Coal is what gives political hurts to our federal government and its sponsors, the Minerals Council of Australia, but actually has little effect that I know of on the rest of Australia.

IEEFA has also put in a positive submission for the enquiry on the federal climate bill for net-zero emissions by 2050.
https://ieefa.org/wp-content/uploads/2020/12/Climate-Change_National-Framework-for-Adaptation-and-Mitigation_Bill_December-2020.pdf 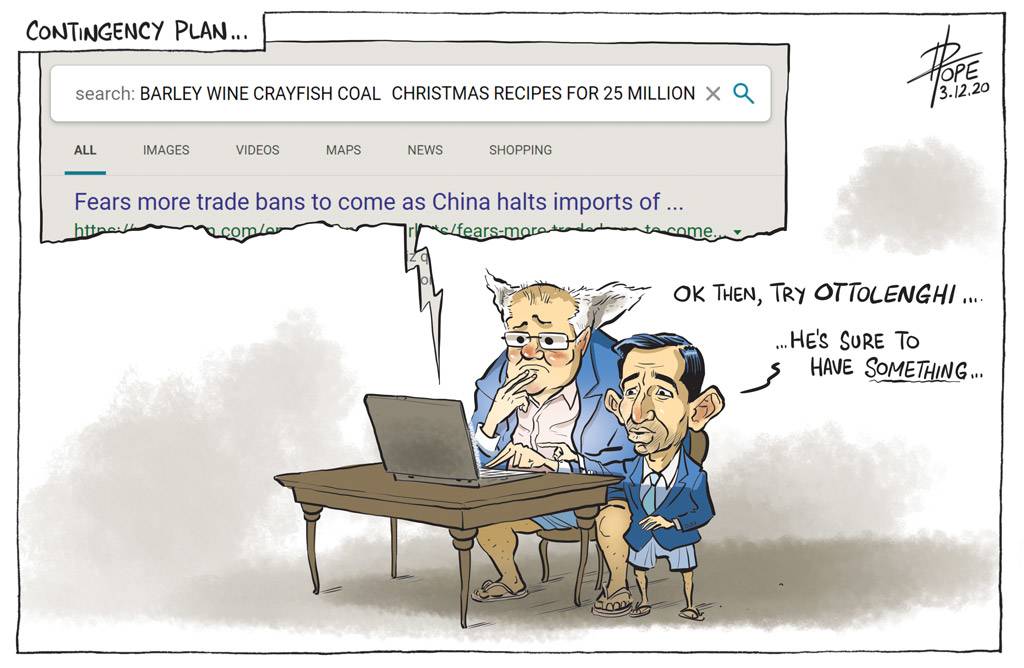 There was in fact a large and prolonged drop in all sorts of production and coal power station generation during during 2020 pandemic in China, and its effect on global demand for many types of Chinese production is ongoing. Air pollution over China cleared to low levels not seen for many decades. It would not have been surprising to find out that the local coal stocks built up, and some import suppliers were going to be favoured over all others.  This month their is some catch-up increase of production, so demand and coal price have temporarily risen again. (Tim Buckley)

Are "Free Trade" agreements really free if either party is not free to stop trading? The Australian government has obliged by helping various levels of Chinese government to make that decision. Some flexible renegotiation of supply should have taken place, but somehow this did not happen. Given the distributed CCP control across diverse regions of China, it is not even clear which organizational part of China is involved.

"The Monthly" posted a current article - "Perfect Storm Brewing", if you have any free reads remaining this month.

Sailors trapped onboard the waiting ships are in the worst position, and are in very uncomfortable circumstances.

Australian coal exports to China were worth $14 billion last year, and, for the many coal-lovers in the Coalition, the one argument for the industry’s continued existence – the financial one – has just been crushed. It was hard enough justifying a project such as Adani’s Carmichael mine before; now it looks ridiculous.

Adani’s Carmichael mine is not only ridiculous. It is reckless and criminal, in the light of future climate conditions. Global heating has accelerated to 0.25 C per decade. This represents a considerable momentum of earth systems change. There is now higher flow of solar heat energy being dumped into the capacious volume of our oceans.  We've gone up from 4 to 6 Hiroshima sized bombs of heat energy per second. Yearly increase of greenhouse gases is still near highest levels ever. Another 2.5 ppm of CO2 still builds up every year. Several obvious climate change tipping points underway. By 2030, we will be passing the Paris 2015 "aspirational danger limit" of 1.5 deg C warming. Global warming looks to be unstoppable in my lifetime, and more than 2 degrees is obviously going to happen unless a miracle occurs.

At least we ought to try taking our foots off the global economy accelerator pedal. This is the definition of emergency. Our biosphere risk is multiplied by the time needed to reverse the direction of climate change momentum. The risk is not linear. Each degree of warming adds a new set of risks, and worsens all the existing. System changes will unkindly cascade and combine. We are headed for a real systems road smash.

I am waiting for the global finance, insurance money systems to wake up, and ostracise or stop footing around with any institution or corporation that tries to fund new fossil fuel projects. Such projects are equivalent to deliberate plans for future climate ecocide and genocide. Ecosystem carrying capacities are already crumbling under the current consumption demands of global civilisation. The weight of wealth and demand for more money making exceeds the capacity of our biosphere to provide.

Adani is such an awful example of this.  Adani has somehow managed early on to set up a electricity generation agreement with Bangladesh authorities, such that it will be charged the cost of electricity, based on the cost of digging and shipping (poor quality) coal, plus expenses. This is the target end of the whole chain of ownership, the Galilee Basin mine, the railway, the Abbott Point port coal terminal.

Bangladesh being of course, is sure to be impacted as global climate change progresses. It seems to have been forced to accept a bad deal from Adani. Bangladesh also has with a strong push towards, and excellent economic case for local renewable energy, as does India. Adani is involved with palm oil production businesses, which further destruction of tropical rainforests. Adani is a giant corporate money octopus investment business for raking in money now, at everyone elses costs, both now and future. Both the Australian government Indian Modi government should be ashamed of their associations with such destructive, naked poorly regulated capitalism.

The Australian government has to face now the China Coal blockade, and other trade blocking measures that it has wrought partly by its own actions. It has to recognise the reversal of climate-change stance from the new USA administration towards progress in global climate agreements.  It has to front up at the next Climate COP of 2021, as a the government of a country with high risks for future climate change with something to show and tell. The Australian government needs to show it can stop being a tool of the Minerals Council of Australia, and the bunch of foreign mining investors that run it, and the money multiplication for money's sake interests arrayed behind them.

China, India, Bangladesh, are all facing impacts of growing climate catastrophe. I don't care what China's motive is, but Australia will need to fit in with a world under siege from climate change impacts. An Australian economy based on natural resource extraction isn't going to to last very long. Same for all other nations trading away their riches. Australian government won't be able improve anything by demonising the Chinese government. 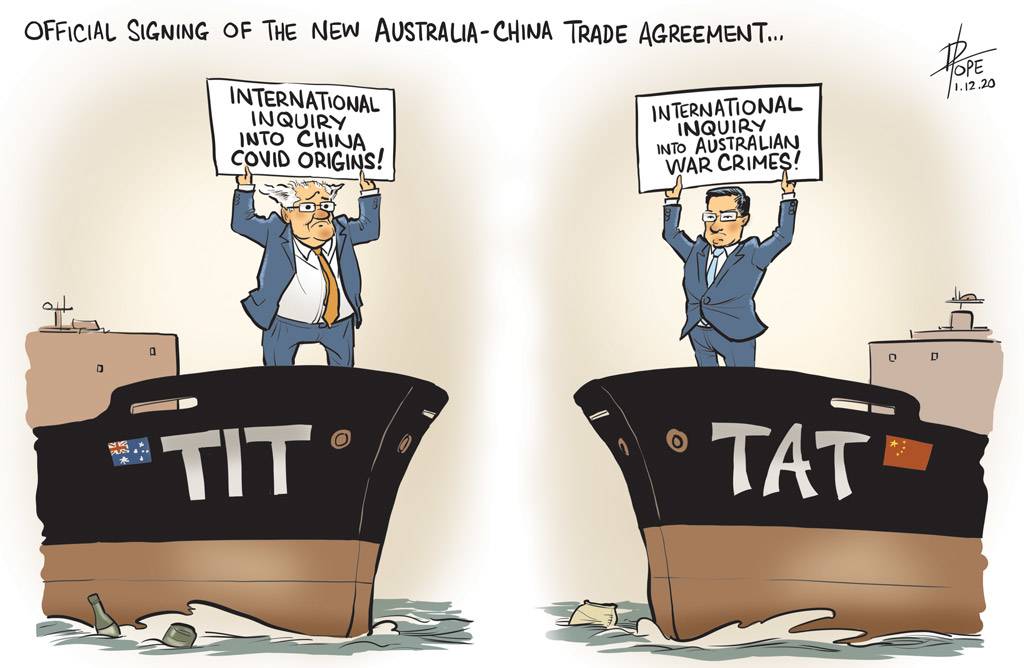 What could be done?

It seems fair that the observed Chinese government wishes should be taken at face value. Have some compassion. Arrange for the stranded ships to deliver the coal to other destinations that will accept it. Arrange for the current crews to be swapped so they can have a land-break. Make it clear that the reneged coal supply arrangements won't be coming back in a long time, if ever. This will be consistent with the falling global demand for coal, and global climate emergency. This needed to happen sometime real soon, preferably at least thirty years ago.

The coal in question wasn't exactly "Australian" any more. It belongs by mining rights to the foreign mining corporation that dug it up, who has organized to sell and ship it.  The origin state government may or might not get a royalty payment sometime later based on the slim profit margin, if any. This will hardly be missed. There aren't many direct Australian jobs involved either. Most of the money was going overseas with the coal.

As China appears to want to reduce its imported coal consumption, various corporate mining exporters looting Australian minerals will have to renegotiate and reduce their planned yearly extraction. Appeals to corporate referee organisations with corporate favouring rules such as the WTO, will take far too long. Compensation claims will be difficult. The Australian government can then try to wash its hands of the whole episode.  It does not seem that the Chinese government thinks it worth talking directly with our Australian government.

Talk about chickens coming home to roost: as the rest of the world’s developed nations pressure a recalcitrant Australia into climate action, our largest trading partner kneecaps our coal trade. The Coalition MPs who have spent so much effort propping up a dirty, dying industry have just been spanked.

The current Australian government isn't likely to change its attitude. Business as usual is being clobbered. Covid-19, lock-downs, collapse of trade, collapse of people movements, telling foreign students to go home, etc.  The Scott Morrison government, perhaps aware of what is coming next, is really into China bashing now, with support from the foreign mining media (Murdoch).

Will some real leaders now stand up and respond differently please?  They will have to account for themselves at the next election campaign. Many things are never going to be the same as before, and require new policy.

The writer of TM article, Nick Falk, notes finally that Australian government will not garner much sympathy outside. I hope that this happens at home too.

With our recent record on climate change and human rights, we don’t even have our good name to trade on.