Cut Fossil Fuels in half by 2030 or be Climate Busted

Global heating continues to accelerate. We humans continue to add greenhouse gases to global solar radiation imbalance, setting up for the big extinctions to come. We lose a little more ice every year. Permafrost ecosystems thaw is now so passe.

This is all such a slow, incremental, version of the warming pot syndrome. To refer to the destination has become "alarmism". As if we expect God or something else to intervene for us when things become too bad.  It is true that all systems under strain will eventually break. Too many of our conventional politicians and media can deny we have a global climate emergency. After all, all the people that matter to elites are mostly still here, and those falling off into the unemployment social abyss can still be safely ignored. Scott Morrison ignores them, and he is our social leader. Denial of slow social collapse is a national behavioral blind spot, only felt by those closer to the margins.

Overgrown global Humpty Dumpty is not ready for his big fall. He is much bigger after 3 decades of global growth since the first IPCC report of 1990. But everything I read adds up to more growth. That is the impression I get from random samplings of the supposedly analytical press. For instance, the Saturday Paper, to which I subscribe, has an article "How Australia’s leaders are preparing for climate change", by Karen Middleton. Some adaptions are starting to happen now. My state of NSW, with support from all parties except One Nation, has suddenly lurched forwards with legislated plans for renewable energy plans for 12 GW and associated employment opportunities. No one talks about the need or possibility for a global energy systems dive, and the social system collapses that could follow.

A renewable energy transition is clearly written into our immediate future. Seeing which way the wind blows now, the Australian political parties should be busy rejigging their policy sail settings. Ex federal finance minister, Mathias Cormann is suddenly a born-again evangelist for greenhouse gas emissions reduction. This is not really a sight for domestic audiences. It is a behind the scenes snake-skin shedding operation and make-up transformation for a mysterious OECD job application. The Australian Labor Party hasn't moved from its position of keeping coal operations going for as long as it can. Scott Morrison hasn't yet finished his big song and dance spectacular called the "Gas led recovery".

"This week, the government gave environmental approval for the controversial Narrabri gas project, in north-west NSW, despite ongoing opposition from Indigenous traditional owners and farmers." So says the TSP. And what about climate activists? The TSP article failed to mention climate activists as opposition to the project, and so underplayed implications for global heating. Australia's gas export industry will push up domestic emissions beyond current weak reduction targets, as well as exporting global heating. This is a sure sign that climate activists like myself are considered powerless and unimportant by business, who are likely the main clients of the Schwartz media group. At least the climate change subject gets an airing. Also very powerless is the platypus species, which are disappearing from our rivers. The homeless begging on CBD streets is now a feature in Australia, as are regular deaths of international students in bicycle accidents while working to transport uber food boxes for a pittance. 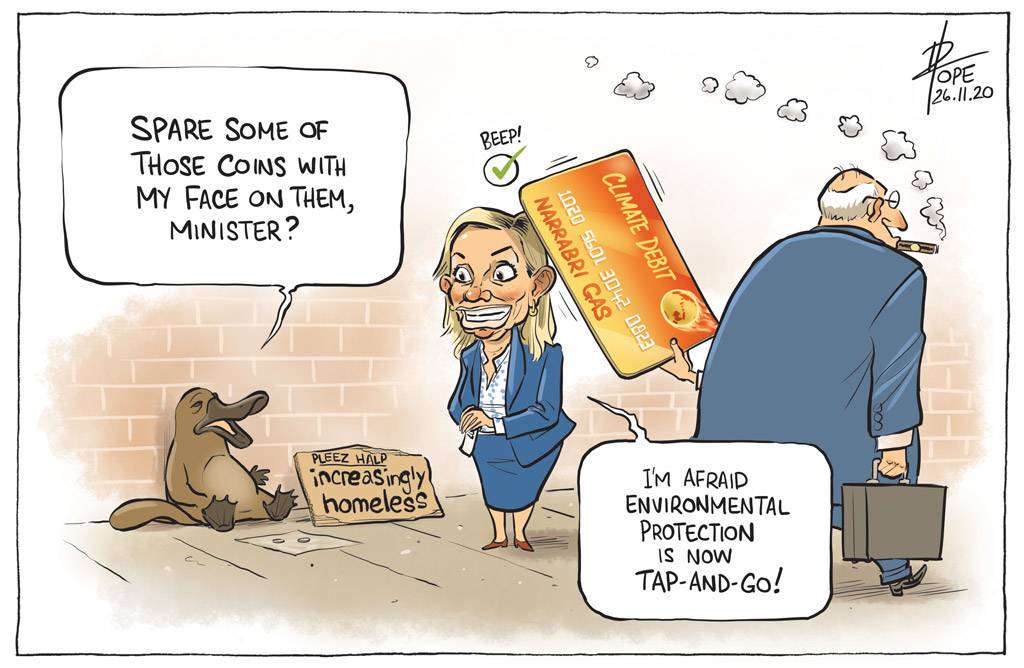 Meanwhile, real activists point out that the Santos Corp. are cautious about the project. A record 132 environmental conditions are included in the NSW "project approval", from safe disposal of unavoidable toxic waste, to managing bushfire and native species threats. I heard on radio, that most likely it will be after 2023 when Santos decides if how they are actually going to try and make profit money for their investors by exploiting the Narrabri gas field. Being allowed to make profit money for investors is the full, entire and only important issue for Santos. A future NSW can pay environmental costs forever as far as foreign bankers are concerned. It all adds up in GDP. What then was the big rush to hurry through the independent panel assessment and environmental approvals? Concern over price for future share options?

Look now into various Crystal Balls. The peak oil website, is still relevant, and makes a prediction of increased global pace of renewals adoption. Assuming the global megamachine does not break down entirely, total fossil fuel use has reached its last historical peak ever in 2019. Global corvid pandemic is ongoing. Fossil fuel mining and operations costs, and risks of breakdown of global supply chains, and competition from still falling costs of new-build renewable energy installations, all predict more rapid growth in renewable energy adoption. It can only increase, unless everything in the global economy entirely collapses. What a safe prediction.

According to this peak oil article, "business as usual", the emergent property of all human economies, will run our global megamachine at a still growing rate of total energy dissipation, now achievable by more renewable energy. This will not achieve sufficient rate of fall in global fossil fuel emissions, and so climate catastrophe still accelerates. The projections do not include effects of climate catastrophe, yet we all know they have already started. Climate change impacts will keep growing, long after we stop burning fossil fuels. Future climate impacts are delayed but are predicted to bring a much bigger fall of MTOE, for each failure of human systems-restraint fails to bring about.

The face-off in the South China Sea, military bases around the world, and China's Belt and Road Initiatives, and wars relating to pipeline projects, all reference themselves to remaining regions of cheaper fossil fuel extraction and shipping routes.

How national and global economic systems change now is uncertain. Strategies and behaviors are entirely different in a collapse situation. Renewable energy is not a 100% replacement for fossil fuels, and so many activities may collapse faster than expected.

Despite the climate change crash ahead, our industrial civilization is hooked on growth. Even when we can't always get what we want. The Monthly features an article by Richard Dennis , "Which growth and what jobs?". Are we meant to question the underlying growth premise?  Jobs and growth have been the theme of every major election campaign of the past half-century. It appeals to our most basic instincts for prosperity and reproduction. Another TSP article "Population decline and the economy" , says Australian economic growth in the past decade has been forced by population growth through immigration. Actual infrastructure spending per person, to provide the necessary homes, goods and services has fallen. So has the national birth rate. Young people in Australia find it hard to get stable jobs, making it harder to pay for rising rents and property prices. No surprise the national birth rate has fallen below replacement levels. But foreign mining profits and fossil fuel exports keep growing just fine, because they help force-feed growth overseas. Trade in people or goods pushes growth, but are we better off with more people?

Corvid pandemic reduces global energy consumption by 5% in 2020. An 8% reduction every year is required to take us below 50% by 2030, for a safe climate, an even sharper drop than this ourfiniteworld.com prediction.  National cohesion requires a cooperative national "There's a war on" social scale of organisation, with rationing to even out inequality. The the Gail Tverberg version peak is about 130 exa Joules less than shown in the graph from peakoil.com after units conversion. I suspect a mistake in the xaxis for the peakoil article, which then must be taken as improper scale. Total energy production is estimated at less than 15,000 MTOE in 2019 - https://yearbook.enerdata.net/total-energy/world-energy-production.html

Now we come to vital ingredient for human economic systems in which failure of growth confounds the expectations of all.  In 2020, all over the world, with declining fossil fuel, energy, food and water systems,  we are entering the era of "Global Discord", which includes everything from civil strife, to civil wars and global wars.  Peter Turchin, a historian into statistical detective work, has uncovered evidence for regular national cycles of growth and discord. A major problem for any nation, is the number of "elites", who might be defined as those people with enough talent and drive to insist on getting to do and be what they want, especially when they can't. A failing economic system cannot provide nearly enough positions for them all. Revolution is a regular political strategy of appeals to large numbers of supporters from disaffected socio-economic classes, to form a mass of counter-elites. Anger and resentment become political tools. Conflict becomes real, and likely to burst out of its social media incubators. The USA is now a particular bad case. Australia is only a few years behind. After all, a bunch of elites who think they know what is best for themselves, have been running this nation for decades with policies which lead to a no-escape climate predicament. A reckoning is overdue.

"The Next Decade Could Be Even Worse"
A historian believes he has discovered iron laws that predict the rise and fall of societies. He has bad news. Here is a to article in the Atlantic magazine written about Peter Turchin's bad news on the current historical cycle. On top of a energy systems, and climate change transition, we will suffer many forms of collapse in civil society. The problem is that history is full of such cycles of conflict, and nothing in our fossil fuel age indicates we have learned anything from them. Social strains build up until sudden collapse, like any networked relationship system.

The Turchin statistical approach to history says we are animal creatures after all. Our beliefs and emotions are a creation of our brains, which have been designed by primate evolution. Our behavioural patterns are not our own making, however superior we think our native culture is. Our societies are scaled up primate social groups who are competing with each other, and have better, though still imperfect communication. Example case is climate change denial. A careful approach to measurement has revealed that human brains are linearly scaled-up primate brains. Nothing extraordinary. They have the same overall cell density and micro-structure as other primate family members. https://www.frontiersin.org/articles/10.3389/neuro.09.031.2009/full

On realclimate.org, a site mediated by real climate scientists, to discuss climate science. So much change going on now.

This month’s open thread for climate science. As if there wasn’t enough going on, we have still more hurricanes in the Atlantic, temperature records tumbling despite La Niña, Arctic sea ice that doesn’t want to reform, bushfire season kicking off in the Southern Hemisphere while we are barely done with it in the North…