I acknowledge with gratitude the recent CounterPunch article on this same topic, "Planet Earth is Heating Up Faster" by Manuel Garcia, Jr. Good article, but I wanted to investigate and write my own version from the original science article, "Satellite and Ocean Data Reveal Marked Increase in Earth's Heating Rate". It deserves a big boost with strong attention to my Australian government's climate action denial.

The "key points" of the science article say there is an approximate doubling of Earths Energy Imbalance (EEI) from mid-2005 to mid-2019. This is a net effect, of multiple earth system changes.  As our atmosphere gets warmer, and land and ice systems change, more incoming radiation is being absorbed, less is being reflected. With our rapid warming of the planet, reflective ice is disappearing, and so are highly reflective clouds.

Atmosphere greenhouse gases have increased,  - "trace gases". In response to the warming, the average water vapor content has increased to magnify the warming greenhouse. Earth's energy imbalance has increased, even though the warming is supposed to increase the outgoing long wave radiation ("heat energy"). Human activities are still turning up the thermostat dial on earth's final temperature, faster than the earth systems can actually warm and catch up with it.

Since the Earth's incoming solar radiation has been steady, the heat energy balance is measured by the energy leaving the top of our atmosphere. This is noisey data, from year to year, depending on longer term weather system cycles, volcanoes, and also variations in human industrial activity. Over 15 years is a long enough time to see if there is a trend. There are two separate measures of warming compared here, namely the Top of Atmosphere Radiation Net, as seen by our orbiting satellites (red color)  and the Planetary Heat Uptake, as measured by measurements of temperature changes in land and ocean (color blue). About 90% of the added heat is stored in our oceans.

How remarkable is this? These independent estimates of the net energy flow into our planet, have near perfect matching trend lines, measured by the same units (Wm-2), despite the variation in yearly discrepancies between them. The climate science applied here to the raw measurements is systems-consistent. Science really does know how to measure heat energy. Both kinds of measurement have what could be described as "sampling error".  They are physical systems from which to determine overall state using a finite number of sample measurements Over many years there is physical mixing of heat with ocean currents around the world, and circulation exchange with its depths, so with consistent sampling, the average change in heat energy state is in agreement with the energy inputs to earth systems. The very deepest ocean abyssal depths do not seen to have been touched with ocean warming, yet. 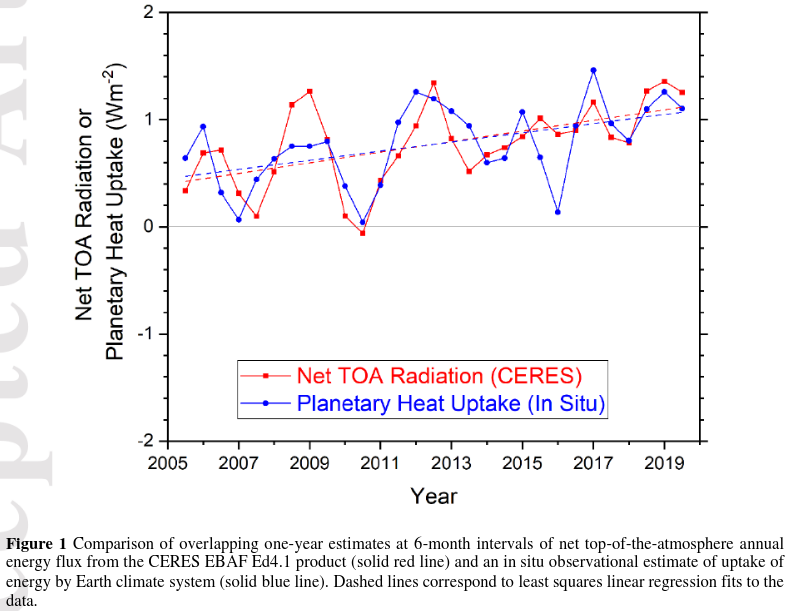 The article goes on to attribute the actual doubling to where various components of our earth climate system have changed, and shows these same units on pictures of global distribution color maps for each component for the same energy flow units. It provides a very comprehensive and consistent overview of our climate predicament.

Meanwhile the rate of earth warming has doubled in the last fifteen years. No wonder that climate changes are happening earlier than previously predicted. Instead of pressing hard on the brakes to halt or at least slow industrial civilization growth, our civilization has accelerated "flat to the floor". Now we are hurtling towards a global-wide, biological life systems crash, which will also include our global civilization crash. Hot house hell is coming on fast. Say bye-bye to 500 million years of evolution of biological life on planet earth, as disappearances are moving fast up the ecosystems webs of species. The biggest changes are occurring in our oceans. Their overturning circulation happens on timescales beyond that of our industrial civilisation.

This is also due to the occupying impacts of global industrial civilisation. Roads, cars, trains, ships and planes go everywhere, and carve up the landscape. We scrape clean the productive bottoms of the oceans. Whole mountains have been blasted away, and deep wide mining pits, and countless millions of bore holes slowly leech mineral and gaseous poisons into the air. Factories are churning out new versions of products and chemicals to be circulated into the bodies of all living things. Rivers are dammed, forests cleared, rich coastal areas built up and polluted, soils lost. Wastes amass in piles and pools. Industrial civilisation seems unstoppable in its bid to kill all living things and eventually us. Do you expect that industrial progress and growth can continue?

This is the ultimate price, a slow, remote, nearly invisible, distributed and cumulative cost, of global systems disorder. It is caused by the workings of our entropy generating, global industrial machine. Disorder is created everywhere to make a powerful, concentrated comfortable order for a growing smaller fraction of the "elites" of human civilisation.

We have given ourselves over as slaves to the "magnificent bribe" of our industrial technics.  The bribe price of our rupture from living systems, is a prison cell in our industrial fed cities. We can hope for a better cell and more privileges, but the freedom of being an essential part of nature does not exist anymore. The only welcome brief respite for the rest of living earth, that the tiny fast replicating virus of COVID-19 has now jammed into of the parts of the global mega-machine. So suddenly the powerful have to acknowledge we are still biological and mortal

All this should feed into politics, whereby the current party of government of Australia, are always shouting out that they are global leaders in emissions reduction. Our much vaunted success refers to domestic only, really slack targets, fudged with land-clearing accounting and domestic emissions are to be undone by processing for gas exports. Like other western nations in the "G7", Australia does not count the embedded emissions it consumes in imported products from the rest of the world, particularly China.

Australian government has yet not been able to bet a grip on the notional target of "net-zero" emissions by 2050.  This has been the distant magical year used by politicians of most nation-states use to deny responsibility they have to make big changes start happening on their own watch.  The year 2050 has been a "kick the can down the road" target for the last three decades. There is hope, if this means a net-zero policy contains a mind-killing cognitive dissonance too big for political sanity to handle. Australia cities are built on the coastal fringes of this island continent. Sea level rise will eventually wipe so much of the board of the real estate wealth game that many Australians have been playing. Too many coastal ecosystems are already fragmented. The oceans will undergo changes from oxygen depletion, circulation stagnation. They will experience a huge drop in primary production of food webs and global oxygen recycling. This is a massive global system change invisible to our common senses. (The quiet crossing of ocean tipping points: https://www.pnas.org/content/118/9/e2008478118)

Right now foreign gas and coal corporations of sovereign risk fame are still running rampant off the leash in Australia, with the full blessings of federal and state governments. Foreign mining corporations have achieved strong mind control over the majority of government and baseline media. The only hope is that governments are struggling to assemble a convincing sham climate policy. When does it become a great relief to have a real one? This study shows that the chasm between global reality and industrial policy is widening. A doubling is the behaviour of an exponential function.